Are you looking for something special?

Take advantage of the unique opportunity to rent historical vehicles in Pilsen to spice up your wedding, company celebration, promotion or other event that calls for something truly special. 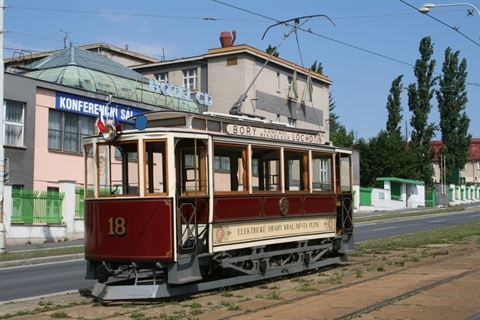 The oldest functioning electric tram in Central Europe and built in the workshop of Václav Brožík & František Křižík came from the first series of twenty trams manufactured for the City of Pilsen. It started regular service on June 29, 1899 – back then it was nicknamed “the mayor’s coach” – and was the very first tram to ride the streets of Pilsen. It is clear to understand why it attracts attention and causes people to stare in amazement: to this day it is equipped with a number of original unique parts from the workshop of coachbuilder Václav Brožík and legendary inventor František Křižík, who in his day created the blueprint for Pilsen’s municipal tram transportation network and supplied all the electrical equipment for this model tram.

The tram was overhauled and restored to its original 1899 appearance as part of the celebrations commemorating Pilsen’s 700th anniversary in 1995. In 1991, the Ministry of Culture declared the tram part of the nation’s cultural heritage. We take care of it as best we can, but we definitely do not want it to turn into a well-polished exhibit. It is still a tram that is a joy to see in the streets (especially in the city’s historical centre), and riding the tram is an unforgettable experience. It is also here to serve you...

Given its original wooden body, the tram understandably cannot be operated in the winter. If possible, plan your event for the period between spring and autumn. We will plan out the exact route for your unforgettable ride together with you according to the operations code for the historical tram.

As the first all-metal, large-capacity, four-axle tram featuring swivel bogies, T1 trams from the ČKD factory in Prague started to be supplied to Pilsen in 1955. By 1957 a total of 33 had been delivered to Pilsen, and due to a tram shortage, another 16 older T1 trams had to be purchased and brought in from Prague in the 1980s. The original Pilsen tram with registration number 121, manufactured in 1956, was preserved as a historical tram. The T1 tram is characterised by the way seats are organised lengthwise with passengers’ backs to the windows, the conductor’s post and the wooden slat floor. Let yourself be carried away...

The successor to the narrow T1s was the wider and more spacious T2 series tram. A total of 26 were supplied from the ČKD plant to Pilsen in the years from 1960 to 1962. Unfortunately, none of the original Pilsen trams were preserved, but thanks to the help of the Liberec Public Transit Company, we were able to obtain one of the last operational trams of this type and add it to our collection in 2006. For the 110th anniversary of public transportation in Pilsen, in 2009 it received a new red “coat” following a general overhaul and its interior was adapted to how many can still recall the tram looked when it rode the streets of Pilsen. It was assigned the number 133, and since the end of 2010 it can also boast of reproductions of the original upholstered passenger seats and a conductor’s cash till. We are gradually restoring the interior to its original appearance, but already now the tram is an attractive invitation to go for a ride together with the other historical trams. Try it yourself... 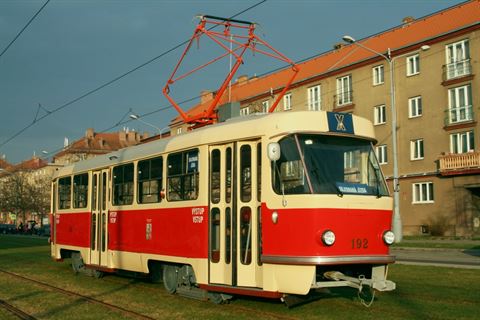 The next successor, the world’s most successful and widely used tram in history, was the T3 series tram manufactured by ČKD Prague. Due to regular updates of the electrical equipment, the installation of electronic information and ticketing systems, improvements to the interior, control and operation of the tram, the T3 would continue to be a dominant feature in numerous cities throughout the country and around the world for years to come. A total of 128 T3 trams featuring various modifications were delivered to Pilsen alone in the years from 1964 to 1987, and another 11 used trams were purchased from Prague in the 1990s. Our historical number 192 T3 tram is unique, though, as it is the original version. Even the interior is original: original laminate seats, fluorescent lights connected directly to the 600V tram network, partially open driver’s post, the original grooved rubber floor covering and classic metal signs. Even this red “grand dame of the rails” is here for you… 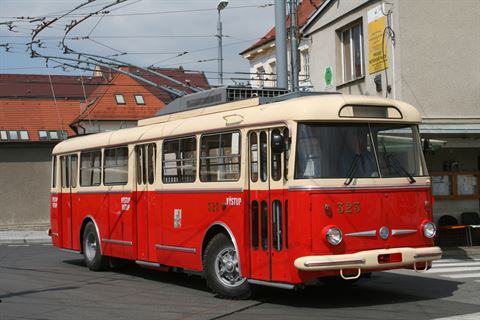 Škoda 9Tr trolleybuses were manufactured in 1961 – 1982 at the Škoda factory in Ostrov nad Ohří. A total of 722 vehicles were supplied to cities throughout the former Czechoslovakia. There were 153 ŠKODA 9Tr trolleybuses from different series and model lines which served Pilsen from 1961 till 1994. When the trolleybuses were operated, the majority were not overhauled and were replaced with new buses after nine to twelve years. Pilsen stopped operating 9Tr trolleybuses in June 1994; the last 9Tr operating in the country was taken off the road in Jihlava in May 1997. We were able to save this trolleybus with registration number 323, which had served the Pilsen network from 1979 until November 1991. After it was retired in the summer of 1993, it was sold in its entirety to the owner of the AIR-park museum in Zruč nad Sázavou, which served as a depository. Here it stood for three years and did not undergo any maintenance at all. On September 8, 1996, a member of the Škoda – Bus Club Pilsen purchased the trolleybus and started to restore it. In 1999, trolleybus no. 344 was purchased and served as a source for spare parts. Plzeňské městské dopravní podniky, a.s. bought trolleybus no. 323 in October 2010 and, after totally restoring the bus, added it to the company’s collection of historical vehicles. Book a ride in this unique trolleybus and remember the years of long ago with us…

How to book a ride

Have you opted to book a ride in one of our historical vehicles? Here is where you will find out what to do, including how to order and how individual vehicles can be used.

You can select any tram or trolleybus stop in the network for passengers to get on and off the vehicle, but considering that all vehicles are parked at our depot and the customer is always charged the cost of the entire route (including the first exit from the depot to the place where passengers board and the final crossing into the depot after the participants have gotten off), we recommend that you select a stop near the depot for pick up and drop off so that you can make the most of your ride. Of course, though, the pick up and drop off points are entirely up to you. 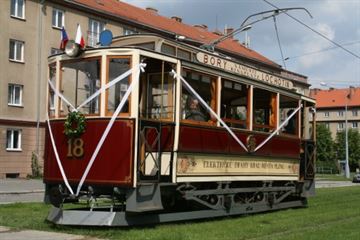 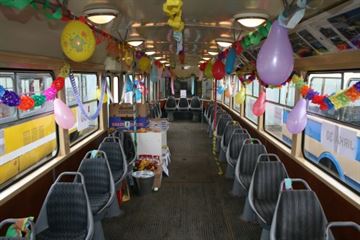 Unlike the ride, though, there is little we can do to arrange the weather to your liking. Although the conditions for operating our oldest wooden historical trams are very strict and forbid operation when it is snowing, raining or visibility is low, we can prepare the contract for you so that in case of inclement weather, we will dispatch another suitable tram from our collection so that your event can take place without interruption. Upon previous agreement, the vehicle can also be decorated before the ride to add to the celebratory atmosphere.

If you already have a clear idea about how you want your ride to be, simply send the following information to the email address below:

After we receive this information, we will prepare a proposed contract for you so that we would be able to agree to the arrangements with enough lead time before the ride takes place.

If you have any questions about booking a historical vehicle, please email or call us. We would be happy to help with the planning.