Home / About us / News
Share on FacebookShare on TwitterPrint

Starting 23 January 2017, till approximately September 2018, Mikulášská street will be closed for all transportation due to planned reconstruction of railway bridges. This is reason for following changes in routes of several lines – trolleybus 12 and buses 35, 57, N2 and N5.

Stops “Pařížská” and “Mikulášská” will be cancelled for line 12. There will be alternative route via stops „Anglické nábřeží”, “Prazdroj” and “Železniční“.

Trolleybuses 12 heading from Nová hospoda to the depot will go along Folmavská street. 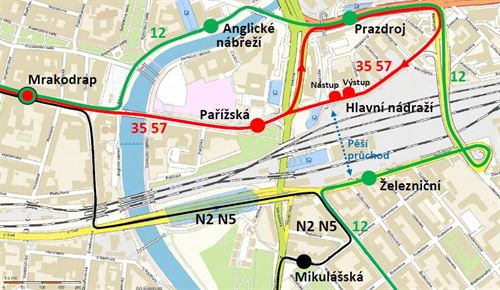